As was shown earlier the universal matrix of energies came as a result of the initial act of creation and the sub­sequent effects that created the universe. This matrix consists of an organized hierarchy. Each level of the hierarchy of existence is a theophany—a creation by the consciousness of the level of being above it. As such, the hierarchy of energies is interrelated, and each level is sustained by the level below it. This hierarchy of energies is set neatly into a vast matrix of deeply interfaced natural laws. It is both physical and metaphysical.

The origin of the world and the nature of the neteru (gods, goddesses) who took part in its creation were subjects of constant interest to the Egyptians.

Ancient Egyptians had four main cosmological teaching centers at Heliopolis, Memphis, Thebes, and Khmunu (Hermopolis). Each center revealed one of the principle phases or aspects of genesis. As such creation accounts are all consistent with the orderly formation of/within the universal energy matrix.

The totality of the Egyptian civilization was built upon a complete and precise understanding of universal laws. This profound understanding manifested itself in a consistent, coherent, and interrelated system where art, science, philosophy and religion were intertwined, and were employed simultaneously in a single organic Unity.

Egyptian cosmology is based on coherent scientific and philosophical principles. The cosmological knowledge of Ancient Egypt was expressed in a story form, which is a superior means for expressing both physical and metaphysical concepts. Any good writer or lecturer knows that stories are better than exposition for explaining the behavior of things, because the relationships of parts to each other (and to the whole) are better maintained by the mind. Information alone is useless unless it is transformed into understanding.

The Egyptian sagas transformed common factual nouns and adjectives (indicators of qualities) into proper but conceptual nouns. These were, in addition, personified so that they could be woven into coherent and meaningful narratives. Personification is based on their knowledge that man was made in the image of God and, as such, man represented the created image of all creation.

Allegories are an intentionally chosen means for communicating knowledge. Allegories dramatize cosmic laws, principles, processes, relationships and functions, and express them in an easy to understand way. Once the inner meanings of the allegories have been revealed, they become marvels of simultaneous scientific and philosophical completeness and conciseness. The more they are studied, the richer they become. The ‘inner dimension’ of the teachings embedded into each story are capable of revealing several layers of knowledge, according to the stage of development of the listener. The “secrets” are revealed as one evolves higher. The higher we get, the more we see. It is always there.

The Egyptians (Ancient and present-day Baladi) did/do not believe their allegories as historical facts. They believed IN them, in the sense that they believed in the truth beneath the stories.

1 – The solar and lunar principles as represented by Isis and Osiris.

2 – The four elements of the world (water, fire, earth, and air) equated to Osiris, Seth, Isis and Horus, respectively.

3 – The model societal framework is expressed in the legendary tale of Osiris and Isis, their son Horus, and his uncle, Seth.

4 – Numerology and trigonometry, as well as the trinity/triad/triangle cosmic role, as described into the relationship between the father [Osiris], mother [Isis], and son [Horus] are analogous to the right-angle triangle 3:4:5.

The Egyptian well-crafted mystery plays are an intentionally chosen means for communicating knowledge.

Meaning and the mystical experience are not tied to a literal interpretation of events. Once the inner meanings of the narratives have been revealed, they become marvels of simultaneous scientific and philosophical completeness and conciseness. The more they are studied, the richer they become.

And, rooted in the narrative as it is, the part can never be mistaken for the whole; nor can its functional significance be forgotten or distorted.

3. The Three Primary Phases Of The Creation Cycle

The sequence of the creation cycle is delineated into three primary phases, in the Ancient Egyptian texts. The very same delineations were later on duplicated in Sufi (and other) writings.

The followings are three main Ancient Egyptian sources for such triple delineations:

The Egyptian texts speak of three Enneads, each representing a phase in the creation cycle. Nine is the number of each phase—each phase begets the following phase in 9 terms.

The first (Great) Ennead represents the conceptual or divine stage. This is governed by Re.

The second Ennead represents the manifestation stage. This is governed by Osiris.

The third Ennead represents the return to the Source, combining both Re and Osiris.

In The Book of the Coming Forth By Light, both the souls of Osiris and Re meet and are united to form an entity, described so eloquently:

B- Litany of Re: After a brief preface, the Litany opens with seventy-five invocations to the Forms of Re, followed by a series of prayers and hymns in which the identity of Re and Osiris is constantly stressed.

C- Leiden Papyrus J350: This surviving Ancient Egyptian document is dated to at least since the Old Kingdom (2575–2150 BCE), a copy of which was reproduced during the reign of Ramses II in the 13th century BCE .

The Leiden Papyrus J350 consists of an extended composition describing the principle aspects of the ancient creation narratives. The system of numeration in the Papyrus  identifies the principle/aspect of creation and matches each one with its symbolic number.

The manuscript is divided into a series of numbered “stanzas”. Each is entitled “Mansions [of the moon], number xx”.

The numbering system of this Egyptian Papyrus, by itself, is significant. They are numbered in  three tiers—1 to 9 – and then the powers 10, 20, 30, to 90, to constitute the energetic foundations of physical forms—and the third tier is numbered in the 100s.

This numbering system shows the three phases of the creation cycle:

1. The Conceiving Phase/Ennead whose theme is the objectification of a circumscribed area of undifferentiated energy/matter, wherein the world will be manifested.

2. The Orderly Manifestation Phase/Ennead deals with the creation of the noumenal and phenomenal planes—the two grand subdivisions of the manifested world.

3. The Reunification Phase/Ennead whose theme is the return to the Source and subsequent reunification process that leads to a NEW Alpha.

[For the details of the three phases of creation cycle see Egyptian Alphabetical Letters of Creation Cycle by Moustafa Gadalla.] 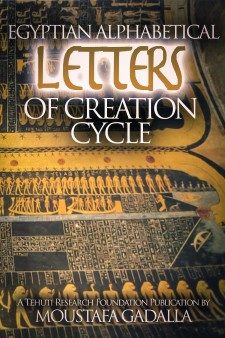